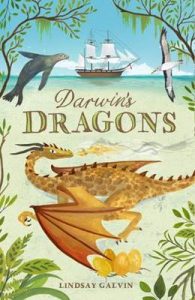 The year is 1835. Charles Darwin, a young British naturalist, is exploring the remote Galapagos Islands during his voyage of discovery around the world. With him is Syms Covington who joined HMS Beagle as a cabin boy but is now Mr Darwin’s trusted assistant.

When a fierce storm breaks, Syms finds himself thrown overboard and washed up on an unexplored, volcanic island. Thinking he just needs to survive long enough to be rescued, Syms is unprepared for the monstrous, screeching beast that swoops from the sky to attack him.

Is he hallucinating or might this be a previously undocumented species? On an island with no fresh water and little food, he is likely to die before he can share any discovery with the rest of the world. Until he comes across a most unlikely ally.

Part thriller, part historical adventure and featuring meticulous research and masterful storytelling, Darwin’s Dragons blurs the lines between fact and fiction. The characters in the book were real people and many of the events are matters of documented fact so readers will end up wondering if, just maybe, the whole story could actually be true.

As featured on The Book Trust.